Home Guidebooks Compilation of schemes and policy initiatives for FPOs

In the context of Indian agriculture, a large majority of farmers are dependent on monsoon to raise their crops. Being small farms, they have a natural disadvantage to achieve scale to justify the high investment. Limited investment capacity of these small farms is also an area of great concern. Access to critical inputs such as quality seeds, fertilisers, irrigation water, power and credit has created a hugely disabling ecosystem for the small farms. Most farms do not have access to the consumer market and therefore are forced to sell their produce to the numerous intermediaries operating in the market. This reduces their profit margin, making the farming business, in most cases, a non-viable one.

Considering the legal environment and political sensitivity of the agricultural sector there is a gradual recognition that one of the ways to overcome the challenges as described above could be to collectivise the farmers into Producer Organisations (POs), be it producer companies, cooperatives or any other form.

Over the years, there has been a growing interest in promoting an enabling environment for the FPOs. Several initiatives have been taken by the Government, Apex financial institutions such as National Bank for Agriculture and Rural Development (NABARD), Small Farmers Agribusiness Consortium (SFAC), private donor organisations, donors, bilaterals/multilaterals, foundations and many other institutions have come forward to support the growth of the FPOs and facilitate their emergence as successful business enterprises.

Promotion and strengthening of FPOs have been one of the key strategies of Government of India to achieve inclusive agriculture growth. Given this rapid growth in the number of FPOs, the issue of access to credit, linking the FPOs to reliable and affordable sources of financing to meet their working capital, infrastructure development and other needs has assumed center stage. Successive Union Budgets have greatly emphasised on the need to promote and sustain FPOs to overcome the challenges faced by small farmers in India.

As the FPOs strive to achieve sustainability, there is an urgent need to reorient the small and marginal farmers across India in terms of National and State policies with regard to FPOs through various schemes, government initiatives, provisions under the schemes, financial needs based on their stages of the lifecycle, modes of finance, subventions etc.

This module presents a compilation of schemes, policies, state-specific provisions, financial support available for FPOs which can help farmers, practitioners, bankers and other stakeholders to further strengthen the FPO movement in India.

During the last couple of years, there has been a growing interest to promote FPOs. Several initiatives have been taken by the Government of India (GoI), apex financial institutions such as NABARD, SFAC, bilateral and multilateral agencies, private organisations, financial institutions and others to support the growth of the FPOs and facilitate their emergence as successful business enterprises.

NABARD has been financing FPOs since 2011 under the Producer Organisation Development Fund (PODF). Prior to the setting up of PODF, NABARD was funding producer collectives under the Umbrella Programme for Natural Resource Management (UPNRM), bilaterally supported by Deutsche Gesellschaft für Internationale Zusammenarbeit (GIZ) GmbH and KfW. World Bank and Asian Development Bank (ADB) is also supporting different state governments to promote FPOs. The other agencies in this space are Rabobank Foundation, Sir Ratan Tata Trust, and many others.

SFAC has been mandated by the Government to support the formation of FPOs. SFAC’s initiative was started in 2011-12 under two Central Government Schemes (CGS):

These two schemes have since expanded its scope and include special FPO projects being taken up by some State Governments under the Rashtriya Krishi Vikas Yojana (RKVY) funds and the National Demonstration Projects under the National Food Security Mission (NFSM). It has initiated other schemes like Equity Grant and Credit Guarantee Fund Scheme and Venture Capital Assistance Scheme.

Under the mandate of GoI, promotion and strengthening of FPOs has been one of the key strategies to achieve inclusive agricultural growth. With large scale promotion of FPOs, the GoI has initiated the following policies to create an enabling ecosystem to strengthen the FPOs.

III. Stages of the FPOs VIZ Requirement of Funds 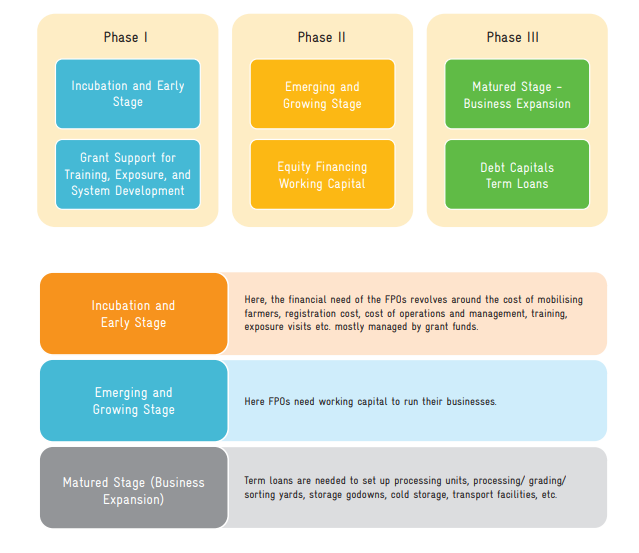 Finance for FPOs can be arranged from the following sources.

The FPOs can also avail warehouse receipt finance. As part of the revised PSL guidelines, loans to farmers up to INR 50 lakh against pledge/hypothecation of agricultural produce (including warehouse receipts) for a period not exceeding 12 months is included as direct lending under the PSL. However, not many FPOs are able to benefit from the scheme due to varied reasons. 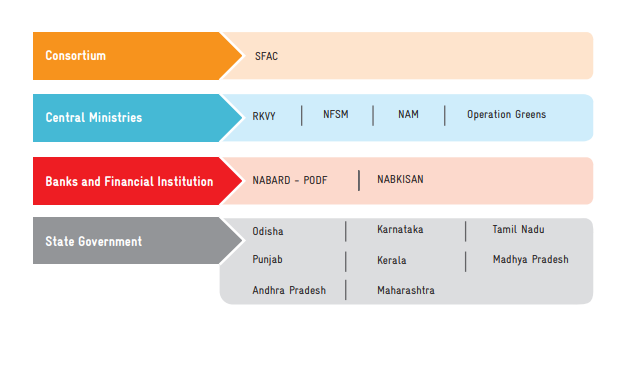 NABARD set up its own corpus of funds through PODF in 2011 with an initial sum of INR 50 crore. The fund supports formation and financing POs by adopting a flexible approach to meet the needs of producers. Any registered PO viz PC (as defined under Sec 581 A in part IXA of Company’s Act 1956), Producers Cooperatives, registered Farmer Federations, MACS (Mutually Aided Cooperative Society), industrial cooperative societies, other registered federations, PACS, etc. set up by producers are eligible under the fund.

Considering the success of financing to POs/PACS in terms of improved access to inputs, affordable credit, better price realisation by members by building scale and enhanced skill development of farmers, NABARD created its own subsidiary NABKISAN Finance Ltd. for meeting the credit requirements of FPOs by adopting a flexible approach based on life cycle needs, while it continues to provide promotional support towards capacity building, market linkages and other incubation services. The scope of this fund has been further enhanced during 2017- 18 to provide need-based grant assistance to those FPOs also which are financed by the Commercial Banks, Cooperative Banks and Regional Rural Banks.

Department of Agriculture and Cooperation and Farmers Welfare (DAC&FW), Government of India launched a pilot programme for promoting member-based FPOs during 2011- 12, in partnership with state governments, which was implemented through the SFAC.SFAC is supporting FPOs through empanelled Resource Institutions (RIs), which provide various inputs of training and capacity building and linking these bodies to input suppliers, technology providers
and market players. SFAC is also monitoring the project on behalf of DAC&FW and the states and reporting on its progress.

SFAC is also implementing the National Agriculture Market Electronic Trading (eNam) platform. The purpose is to provide for a single unified market for agricultural products with much higher price discovery for farmer.

Central Ministries of Government of India like Dept. Of Agriculture and Farmers Welfare, Ministry of Food Processing have also come up with their respective schemes for promotion and support to Farmer Producer Organisations.

As a strategy for implementation of various activities, the National Food Security Mission has also focused on promotion of FPOs to augment food production especially on its designated food crops.

The union budget 2019 has announced formation of 10,000 new FPOs, to ensure economies of scale for farmers over the next five years

Section - D National and State policies for the promotion of FPO

Apart from the National FPO policy, different State Governments have also come up with their FPO policies and support mechanisms for organising and strengthening farmers in their respective states. The policies are aimed at providing direction, incentives and subsidies for development and nurturing of FPOs. These policies would help promote collective farming for credit mobilisation, better adoption of technology and to facilitate effective forward and backward linkages. Some of the state policies and support for FPOs have been documented on following pages.