Rice is a major agricultural crop being cultivated by a large number of farmers in India. In fact, 90% of the land area under rice belongs to marginal, small and medium farmers in the country. Currently, rice is grown in 43.86 million ha with per ha productivity of 2390 kg with the total production being 104.80 million tonnes1. 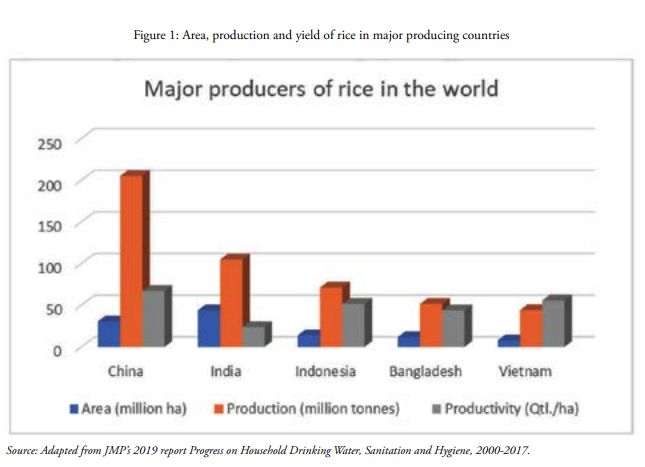 Although India has the largest area under cultivation of rice in the world and is the second largest producer of rice, the per ha productivity of rice in India is quite low compared to productivity levels in other countries. Among the major rice producing nations, China has the highest productivity per ha (67.10 Qtl.) followed by Vietnam (55.73 Qtl.), Indonesia (51.52 Qtl.) and Bangladesh (43.75 Qtl.).

Considering the low yield of rice in India, there is an urgent need for adopting suitable practices for enhancing the per ha productivity of rice. The adoption of improved techniques and practices for rice cultivation could benefit millions of small and marginal farmers across the country.

The System of Rice Intensification (SRI) is a viable methodology for enhancing the low rice yields in India. SRI is a climate-smart, agro-ecological methodology for increasing the productivity of rice by changing the management of plants, soil, water and nutrients2 .

SRI is based on the following principles: `

SRI does not necessarily require or depend on the use of improved or new varieties of rice or on the use of synthetic fertilisers and agro-chemical crop protection to get higher outputs, although such inputs may be used in conjunction with SRI management practices.

However, by reducing farmers' needs for seeds and water, SRI results in higher returns for farmers from their landholdings. SRI therefore contributes towards higher incomes for farmers while also being beneficial to the environment. SRI plants are less affected by water stress, storm damage, pests, and diseases as they demonstrate a resilience that is increasingly necessary with the growing hazards of climate change.

The constraints of rice production vary from region to region across the country. For example, the major rice growing areas are concentrated in the Eastern region, which generally experiences high rainfall and severe floods almost every year, due to which large amounts of rice crops are affected. Similarly, in upland areas, the crops face setback either from high rainfall or drought-like conditions. However, some generic constraints/challenges in cultivation of rice are being discussed in this section.

India has the highest area under rice cultivation, and is the second largest producer of rice in the world. However, the per ha production of rice in India is much lower than that of other leading rice producers. Low productivity of rice means low returns for farmers.

SRI as a methodology for rice cultivation has been developed since the 1980s. It is believed to contribute towards higher productivity, optimum use of capital labour, less input costs, and lesser water requirements (Mohammed, 20183).

Research across several countries has revealed that SRI techniques are not only more productive, but also use less resources while being environmentally benign as compared to conventional or traditional rice production techniques (Sinha and Talati, 20074).

In fact, SRI not only uses lesser quantity of seed per ha but also uses lesser quantity of water for irrigation. SRI alternative water management methods can reduce water use by 25-50%, while raising yields by 50-100% or more (Mohammed, 2018). Moreover, farmers can also reduce the use of costly and environmentally damaging chemical fertilisers and pesticides, thereby lowering their production costs.

The project idea is to support groups of rice growing farmers in adopting the SRI method of rice cultivation that will result in higher yields for them while reducing their input costs. The project seeks to build capacities of farmers in SRI methods while simultaneously providing them with the financial support to adopt improved irrigation and post- harvest technologies.

4. Impacts and Sustainability - System of Rice

This model has a high potential to be replicated, in rice growing belts of the country, particularly in the states of West Bengal, Uttar Pradesh, Punjab, Tamil Nadu, Bihar and Karnataka. This model could be promoted through financial support from banks and other financial institutions while technical agencies and NGOs may take the lead in popularising and mainstreaming this model.

Based on the experiences of SKDRDP, which has been implementing a similar model in Karnataka, it can be seen that the present model has the potential to become self-sustainable after support for the initial 3 to 4 years.

In fact, while designing this model, certain key components have been incorporated that will help ensure that it will become self-sustainable. These are:

would result in higher revenues. Even in other geographical areas, farmers would take up at least one more crop (in addition to paddy) per year, thereby resulting in higher economic gains for the farmers.

5.1 Scope of financing and subsidy

It is suggested that in addition to getting bank loans, the farmers may also access various schemes at the state level that provide subsidies for rice cultivation using the SRI method. FPOs may also facilitate the farmers to obtain loans for meeting their cultivation costs. These loans would be sourced from NABARD or other banks. It is estimated that individual farmers may require loans up to INR 20000, although a majority of them may seek lesser amounts as loans.

NABARD: NABARD provides financial grants of up to INR 10 lakhs per FPO to meet the initial expenses of each FPO. In addition to this, NABARD also provides loans of up to INR 1 crore to FPOs to meet working capital requirements. These loans are provided directly by NABARD or routed through other banks.

Custom Hire Service Centres (CHSC): The Department of Agriculture, Government of Karnataka is setting up a CHSC at Hubli (cluster level) to assist small and marginal farmers, and to provide agriculture machinery at their doorstep. SKDRDP has collaborated with the Government of Karanataka to set up various CHSCs. The objective of this programme is to provide machinery to the farmers at affordable rental rates to help reduce labour costs as well as to enhance farm productivity. FPOs could establish such centres whereever applicable.

For individual farmers, there are a number of schemes of the central government as well as respective state governments that provide grants and subsidies that they can access. The individual farmers may be supported by their FPO (through farmer groups) to access such schemes. The details of some of the schemes are given below:

Pradhan Mantri Krishi Sinchai Yojana (PMKSY): Irrigation is critical for paddy cultivation and under the PDMC component of PMKSY, financial assistance is available up to 55% for small and marginal farmers and 45% for other farmers for the adoption of micro irrigation systems.

At the state level, there are a number of schemes that give financial assistance to farmers for paddy cultivation, including assistance for seeds, demonstration on SRI, incentives on Conoweeder and other farm equipment, subsidy on rice transplanters, subsidy on farm mechanisation etc. Such schemes can be accessed by the farmers through the FPO.

The proposed business model provides estimates of cost-benefits at two levels i.e. at the level of individual farmer and at the level of the FPO for rice cultivation through SRI method, processing and marketing.

The following table provides details of the expected cost of cultivation and the expected net revenue for individual farmers engaged in rice cultivation using SRI method on one acre of land.

Under the proposed model, farmers are able to get a return of around INR 2.85 lakhs – annualised over 5 years. The net annual returns are around INR 0.35 lakhs (Year 1) to INR 0.72 lakhs (Year 5) – assuming a capital cost of INR 20000 in Year 1 for meeting operational costs.

The Benefit Cost ratio for an individual farmer is calculated to be 1.82 which is quite good.

IRR for a farmer taking one paddy crop per year from one acre land is greater than 150 over a period of 5 years.

Details of cost-benefit of FPOs engaged in processing and assisting in marketing of rice is provided is as follows:

Table 5: Cost-benefits for FPOs engaged in processing of rice and assisting in marketing (1000 acres)

Rice is an important crop for Indian farmers, a large majority whom are engaged in paddy cultivation. Unusually low yields from paddy have a significant impact upon the economic well-being of the farmers. Rice cultivation using the SRI method has the potential to significantly enhance crop yields for farmers while also reducing input costs.

The present model has been developed with an aim to popularise rice cultivation using the SRI method. Based on the concept of farmer groups federated at the cluster level, the proposed model requires adoption by NGOs who will facilitate the implementation of this model.

Financial institutions need to get an opportunity to analyse this business model and, if found suitable, they may support such a model.

Technical support groups or other enabling agencies need may consider developing publicity materials (printed as well as audio-visual) that may help publicise and popularise this model.

The channel partner of GIZ India i.e. SKDRDP, Dharmasthala may be roped in to conduct exposure visits for organisations that take up this model/are interested in taking up this model.

Revenu from Sale over 20 Years